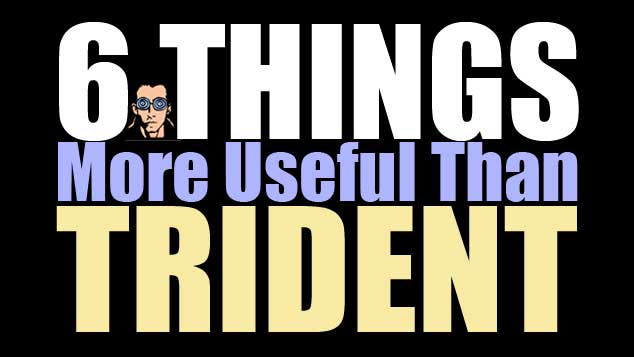 This week, when the Westminster government announced an initial £350 million spend on a new generation of nuclear weapons whilst simultaneously telling us we were broke, I couldn’t help but wonder what was so special about them. It wasn’t so much the price tag that bothered me, even when I discovered £350m was a fraction of the overall £100bn required. It was more to do with being a stickler for symmetry in the exchange of goods – usually when I’m going to spend £100bn on something, I want to know I’m going to get £100bn of useful stuff back.

However, having conducted some research, I can confirm that the following objects are each in their own way more useful than Trident.

Depending on the cargo you mean to transport, a bucket with a hole in it can be put to far greater use than a submarine-launched ballistic missile system. Stones for example, if chosen correctly, can be carried from one end of the garden to another. Bread rolls too can be stacked in such a manner so as to negate the effects of any hole. Once transported, the stones and bread rolls can be employed as missiles in the event of an invasion by ground troops, something that could never be said of Trident. And remember, a bucket with a hole in it can be made even more effective with the addition of a newspaper to line it. I recommend The Scotsman.

New advances in production mean that cardboard sinks can be quite robust. They can withstand several litres of soapy water and, given sufficient interim drying time, can be used many times before becoming ineffective. This is something that could never be said of Trident as just a single use would devastate half the planet, leaving a dusty crater where only the Mars rover might feel at home. Cardboard is also recyclable, unlike Trident which is currently festering on our doorstep without any means of disposal. Additional notes: Trident’s green credentials are negative and are effectively purple; a cardboard sink is unlikely to be deployed accidentally.

Betamax is much maligned but was actually far superior technologically to VHS. If you happen to have inherited a working Betamax, you’re likely to also have a library of movies taped sometime in the 1980’s, as well as some video store cast-offs such as ‘Microwave Massacre.’ This is a huge source of entertainment and is unlikely to give you leukaemia. A Betamax in good condition can still be used to record your favourite TV moments. Providing you have the strength to press its huge buttons you can watch Michael Gove behaving like a knob whenever you please. Highlights from Philip Hammond’s thrill-packed term as defence secretary alas do not make good television.

Sticks are incredibly useful. I keep a collection in the garden in case of unforeseen circumstances. Once I had to use a stick to get my keys off the roof. You might wonder what my keys were doing on the roof. I put them there with a stick. Another time, LaFlamme brought me a pot plant. It started to grow and I used a stick to support it. Soon I needed a bigger stick and then a bigger one. I asked LaFlamme what kind of a plant it was and she said ‘oak.’ Soon it took over the flat and began producing little sticks of its own for future generations to get their keys off the roof. This is all in stark contrast to Trident, which is likely to only ever produce universal death.

One of the main reasons cited for keeping Trident is that it’s a major employer. Aside from the fact that it’s a twisted individual who thinks weapons of mass destruction would make a fine job creation scheme, it turns out only two jobs would be at stake – one guy regularly taps it with a screwdriver and another checks if we’re all still alive. Garbage on the other hand is a major employer. It takes many thousands of people up and down the country to administer and physically deal with the collection and disposal of garbage, as well as to sort through the recycling and figure out what you’re meant to do with Tetrapaks. If we didn’t have garbage, unemployment would soar. Once Trident is dismantled it too will become garbage, creating even more employment opportunities.

Let’s face it, even soldiers don’t have any use for Trident.