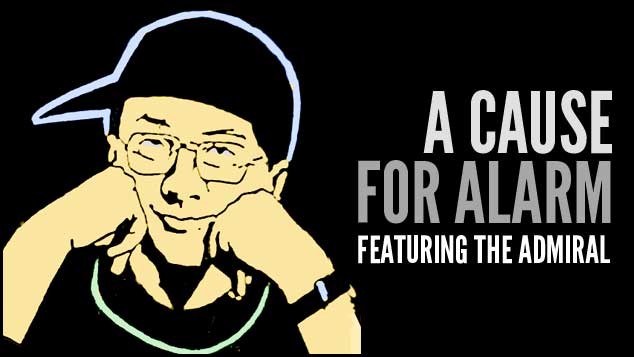 The Admiral showed me a new contraption he’d cobbled together from discarded pieces of circuitry and an old record player. In essence it was an alarm clock. At the specified hour, the device would spring to life, activating the turntable and lowering the stylus arm onto the record. Result – you woke up to the gentle sound of a Chopin sonata or koto music from Japan. He hadn’t tried it yet but assured me it would be 100% effective.

I doubted whether the invention would ever be commercially viable, what with its need for discarded pieces of circuitry and an old record player, but the Admiral countered that my use of the word ‘viable’ was pejorative, whatever that means.

We left his flat to find the nearest purveyor of vigorous dark ale and spent several hours testing degrees of vigour before the barman called time. At this point the Admiral stood, briefly, then sat down again. He stood a second time and buttoned his cardigan, badly, leaving an extra button dangling at the bottom. He sat down once more and suggested we try again, heartily, only this time that I should do the standing. It seemed only fair so I stood, abruptly, knocking over both chair and table and, attempting to retain a shred of diginity, blaming him.

There was a limit to how far we would get in such a condition and it was decided that, the Admiral’s flat being nearest, it would be far enough if I could reach his sofa. En route to the sofa The Admiral explained he had an early start, as he had a couple of days’ work at the hospital devising a way of keeping tags on runaway patients. He said it would be an opportunity to test his new alarm clock and were it not for runaway patients he would have no use for such a gadget.

“I’m going to make doubly sure I don’t sleep in,” said the Admiral, his last words of the evening as he set the device for 7am and left me muttering incomprehensibly about kotos.

I slept as if consigned to a morgue but was awoken by the gentle stirrings of Motorhead’s ‘Ace of Spades’ at a level likely to have been set at the Admiral’s last party. It was a testament to his electronic ingenuity that the device actually worked, but it didn’t work for long as a high velocity boot was soon to be seen heading towards it from the direction of the sofa.

Share on TwitterShare on FacebookShare on Pinterest
In which Tony Boaks and The Admiral conduct some experiments with vigorous dark ale.