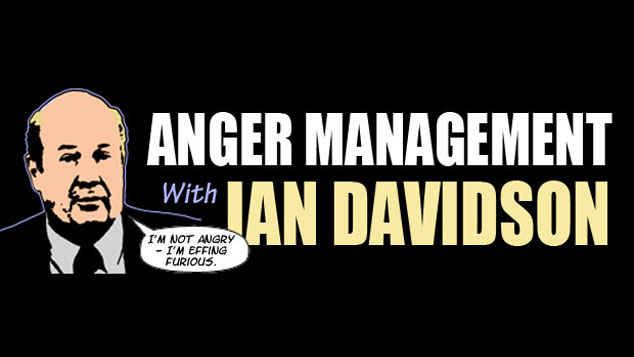 Following a barrage of fury-fuelled eruptions, Labour MP and chairman of the Scottish Affairs Select Committee Ian Davidson has agreed to be filmed as he completes a series of tasks set by his anger management counsellor.

Last week, in a team-building exercise, Ian was expelled from his local synchronised swimming group and banned from the pool after reports of explosive underwater outbursts. Fortunately, fellow team-members only caught half of his foul-mouthed ranting as they were doing the butterfly at the time and every second expletive was inaudible. Claiming the outbursts were not criticism of his team-mates, merely a bad case of rhinitis and a dodgy curry from the previous night, Ian nevertheless agreed to hang up his nose-clips.

This week, in an effort to regain the confidence of his counsellor, Ian is to take charge of the Royal Mile-based china shop, Dainty Delights, a confined space with a large selection of breakable objects, and report back on his progress.

It’s 9am and Ian has just opened up the shop. He has worn his tightest-fitting suit in order to maximise space and the additional restriction has already made him hot under the collar. Unfortunately the situation is not likely to improve as the first customer of the day bears more than a passing resemblance to BBC presenter Isobel Fraser.

Davidson: Well, if you want it that much, you can get up the effing stepladder and get it yourself.

Davidson: I will not apologise. Scotland doesn’t have the resources or expertise to make blue china shepherdesses or even import them so either you know it’s not there and you’re sending me on a fool’s errand or you’re incompetent. Anyway, if you think I’m climbing an effing stepladder in this heat after one of my legendary curries and ten pints of lager, you’ve got another thing coming.

The exchange doesn’t bode well for the rest of the day and by 9:45 Ian has already broken a row of Vittorio Tessaro figurines. He is in mid-rant when Labour party grandee Lord Foulkes enters Dainty Delights. This is ostensibly to acquire a gnome for his new duckhouse, but Ian suspects mischief.

Ian tells the film crew under his breath that Lord Foulkes ‘has something of the Nat about him’ and steps on a Toby jug, shattering it.

Davidson: Whit? State your business or eff off.

Foulkes: I can see one from here. Top shelf at the back, above the Royal Worcester.

Davidson: Look, you ermine clown, if there’s a ladder involved, you’ll have to climb the effing thing yourself.

Foulkes: Ah cannae. Gout. It comes with the ermine which, I may add, you’re not likely to see at this rate.

Ian is faced with a dilemma. He believes Lord Foulkes has selected the most remote piece in the shop to torment him, but is eager to fulfill the terms of his placement. Reluctantly he positions the steps and clambers towards the top shelf, toppling a pair of Limoges vases in the process. He is about to grasp the gnome in question when there is a loud ripping sound from the seat of his snug-fitting pants. It very nearly causes him to lose his balance. This is followed by the sound of the phone and, realising from the ‘Smack My Bitch Up’ ring-tone that Natalie his counsellor is calling to check on his progress, he is eager to answer. If Ian doesn’t make a success of Dainty Delights after the synchronised swimming debacle, he will have to present for other, possibly more infuriating tasks.

Foulkes: (answering) Hello? No, I havnae seen him, doll. He’s probably nipped out for a fag.

Foulkes: What’s that? I’m his carer. To tell you the truth though, I’m not that fond of him.

Having secured the gnome, which coincidentally bears a strong resemblance to Lord Foulkes, Ian lunges for the phone but misses, striking the gnome on the glass shelf below and sending its contents of Royal Doulton frogs to the ground. Lord Foulkes has put the caller on speakerphone and Ian’s counsellor, hearing a torrent of abuse regarding gnomes and a global SNP conspiracy, suspects Ian may be having some difficulties.

Counsellor: Ian? Are you all right?

Counsellor: Did I hear raised voices?

Counsellor: I realise you may be doing your breathing exercises, so one tap for yes, two taps for no.

Ian collides with a row of Banbury Cross plates and this produces considerably more than the two taps the counsellor was ideally looking for. The disruption unsettles Ian and he takes exception to the word ‘tap.’

Davidson: Is this phone tapped?

Counsellor: What are you saying Ian? Are we going to talk about the plot again?

Davidson: How can I be expected to trust someone called Natalie?

Counsellor: You had similar problems with your previous counsellor, Alan.

Davidson: Alan Salmond?  Yes that was always going to work, wasn’t it?  Why don’t you and your mate Alan just come clean and stand for election? Pin your colours to the mast and your lugs back, woman.

Davidson: Are you now or have you ever been an SNP activist?

By this point Counsellor Natalie has recognised the symptoms of emotional fatigue and has already called in a Swat team to administer a specially-developed budgie hood for the overwrought member.  Ian immediately goes limp and is helped out of the shop, followed by his carer Lord Foulkes.

Next week, Ian is embarking on trust-building exercises in which participants are encouraged to put their complete faith in others. Unfortunately his team-mates will be selected from the Scottish National Party, something which Ian may find challenging.

Share on TwitterShare on FacebookShare on Pinterest
Following a barrage of fury-fuelled eruptions, Labour MP and chairman of the Scottish Affairs Select Committee Ian Davidson has agreed to be filmed as he completes a series of tasks set by his anger management counsellor.