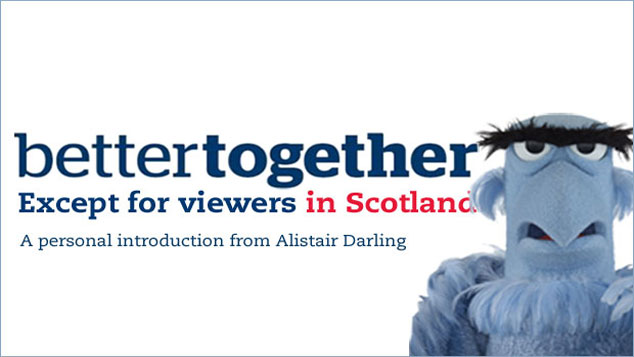 A personal introduction from Alistair Darling

This is your leader speaking. I’m here to welcome you to Better Together, the anti-independence campaign for people like you and I who believe having an upside-down smile counts as positivity.

Now, I know what you’re thinking: who the devil came up with that dreadful name? Not me. I said we needed razzmatazz and suggested ‘There’s no business like the No business.’ They said that was too long. I suggested ‘No No No.’ They said keep it positive. I said ‘Say Yes to Shackles.’ That was pooh-poohed so I said ‘Pooh-pooh to you,’ which wasn’t really a suggestion but was quite popular.

So, ‘Better Together’ it is then. A campaign for Real Scots Together, supporting tuition fees, spending £100bn on nuclear weapons and generally depending on Westminster to tell us what to do. We’ve been very open about who is funding it too, as transparency is everything and we agree that Scotland’s constitutional future should be decided by those who care most – in this case, United & Cecil, a Conservative dining club in Sussex.

What is our core message? ‘We think we will be a lot stronger and better off staying part of the UK because we have no imagination.’ That’s the positive part. Beyond that, it’s that independence would be a one-way ticket to hell. Look at the Americans. They tried it in 1776 and every July 4th they cry into their watered-down beer and beg London to take them back. This year London’s not listening because they’re busy with the Olympics, trying to take the gold from Nigeria in the ‘Most Fraudulent’ event.

Which brings me to Libor. Was I involved in fiddling Libor whilst chancellor? I’ve been asked this many times and I repeat – I’m not musical. But look at what the scandal has done to the banks. LibDem leader Nick Clegg described them as “a source of embarrassment and shame,” although it’s likely he was just grateful it was somebody else’s turn.

The thing is, Scotland would never even get the chance to fiddle Libor because as Danny Alexander said, “independence would damage close ties with the rest of the UK’s financial industry, particularly the City of London.” Admittedly that’s a pretty good reason for a Yes vote and, as he also suggested independence could mean mortgage rises and possible invasion by the planet Zob, he’s not exactly Mr. Rational. But he has a point, which I think is this: independence will leave you with your trousers down and prone to bottom cancer.

What about the business case? Well, in an independent Scotland, English, Irish and Welsh companies will have to be repatriated. Faced with this fact, what did Finance Minister John Swinney do? He announced a £105m economic stimulus package in a cynical attempt to maximise opportunities for job creation and growth. And meanwhile, uncertainty over independence has caused whisky firm Diageo to invest £1bn in Scotland.

The Nationalists are all over the place. Shadow Scottish Secretary Margaret Curran suggested they were losing heart and that “they used to believe in independence but it looks like they no longer do.” I didn’t really know what she meant by that and anyone wishing to contact her should probably dial the area code for her planet first. But at least she’s not as bad as that dreadful Lamont woman. Honestly, if there were an Olympic Incoherent Carping event, she would surely sweep the gold.

The question itself, ‘Do you agree that Scotland should be an independent country?’ is clearly biased in favour of a Yes vote and is unacceptable. Everyone knows it should be biased in favour of a No vote. And it’s the wrong question anyway because it should really be something like ‘Do you believe in life after love?’ and preferably asked by Cher.

Look, here’s what I’m saying. If Scotland turns down independence we can discuss a further devolution settlement. For example, in the event of a No vote, Scotland could be allowed to stay up after bedtime. In sufficient numbers, we could be talking ice cream and jelly.

Share on TwitterShare on FacebookShare on Pinterest
This is your leader speaking. I’m here to welcome you to Better Together, the anti-independence campaign for people like you and I who believe having an upside-down smile counts as positivity.