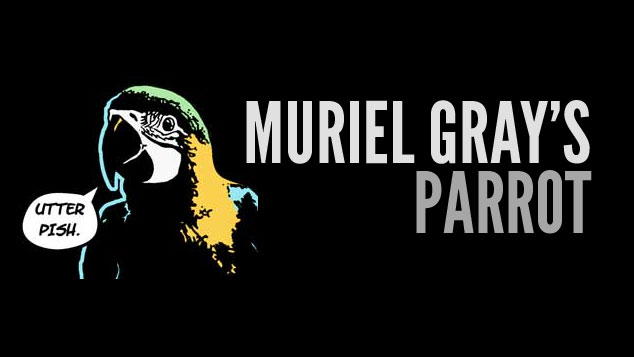 There was an unusual squawking sound coming from within The Admiral’s flat. The last time I remember hearing anything similar was when LaFlamme had agreed to give The Admiral a haircut. It was an ill-judged move on his part, as LaFlamme kept her shades on and held a glass with a sherry-like substance in it throughout. The results, however devastating, were short-lived because as everyone knows, a haircut is just for Christmas and not for life.

The squawking continued as I stepped tentatively into the kitchen-office. On the ex-boardroom table where The Admiral conducted his greatest bodges sat a large multi-coloured vertebrate. Initially I mistook this for a bouquet of flowers but as the incongruity of a vase of flowers in The Admiral’s office sunk in I realised something was afoot. This was clinched when the vase of flowers spoke.

I was somewhat taken aback by this, as it was already more conversation than I would normally expect at The Admiral’s.

“I appear to be stuck,” said The Admiral, from the other side of the room. He had most of his upper body crammed into a large wire enclosure on the kitchen worktop and for a moment I wondered if there had been a body-swap incident, as he is usually the one perched on the table. I wasn’t sure whether he was trying to get in or out, but I held the back of the cage and let him decide.

“Thank you,” he said, removing himself and dusting off the flakes of wood-shavings from his sleeves. “I’m looking after the little chap and it was time to clean his cage.”

“My friend Muriel,” said The Admiral. “You know. Journalist. Lots of opinions.” He said this in a way which suggested she might be dangerous. “He’s not generally any trouble, but he’s most particular about the materials with which I furnish his lodgings.”

“Correct gauge of shavings, or what?” I asked.

“Underneath the shavings,” he replied, “is a lining of four or five layers of newspaper and I’ve been told on no account to use the Daily Record.”

The parrot piped up. “Utter pish,” he said. The animal’s use of the Scottish vernacular was striking.

“Why on earth,” I asked, “would a parrot object to the Daily Record?”

“Well, parrots are among the most intelligent of birds,” said The Admiral. “I can only assume that the quality of journalism within its pages is simply not up to his high standards.”

“Nevertheless,” replied The Admiral. “He does not deem it worthy. Apparently it was only a matter of days with said paper before he insisted on crapping on The Scotsman instead.”

“But soon he also became dissatisfied with The Scotsman.”

“Then there was only one paper good enough for the little prince.”

“The Herald,” said The Admiral.

“It’ll have to do,” repeated the parrot.

It probably said something for the quality of Scottish journalism that this most discerning of readers could only find one quality newspaper and even then it was to defecate on. I can only imagine the foul language had he been raised in Dundee.

I asked The Admiral what could have sparked such disdain for the papers in question.

“Perhaps he used to write for them,” said The Admiral, without a hint of sarcasm. I concluded that it was a possibility. “In any event, you’re perfectly welcome to ask him directly.”

I turned towards the parrot. “So, um.. the Daily Record and The Scotsman..”

“I think I remember your friend Muriel,” I said to The Admiral. “Better get him back in his cage before he starts boffing on about Munros.”

Share on TwitterShare on FacebookShare on Pinterest
In which Tony Boaks and The Admiral encounter a most vocal critic of Scottish journalism.