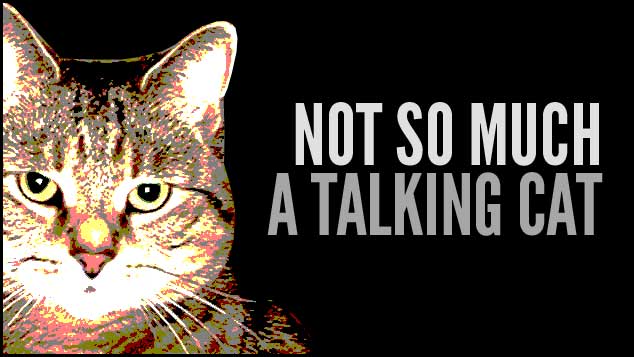 The Admiral had found a particularly fascinating episode of ‘Extreme Trams’ on Youtube and was glued to his monitor. It wasn’t such an unusual state for The Admiral and it was best not to interfere, as this was preferable to his frequent bouts of boisterousness.

“Don’t you have any milk?” I said, trying to find things to combine that might result in a refreshment.

“On the fridge? You know milk ought to be stored in the fridge in order to keep it cold.”

“Ordinarily, yes,” he replied. “But I was experimenting and it’s now behaving like a reverse hotplate.” I ran a finger over the fridge’s surface and sure enough a layer of frost had developed. The milk was practically stuck to it.

I heard a scratching at the front door followed by a thin high-pitched voice, as if a ten-year-old had been compressed within a shoebox. I thought it might be Cyndi Lauper.

“Could you put a little milk in that saucer?” said The Admiral, rising and, without removing his gaze from the monitor, stepping to the front door. For a shoebox, it was large and had very long hair. And whilst its skulking demeanour was typical of its species, it had a most unusual cry.

“Noooo,” said the cat, in a plaintive monotone.

“Excuse me,” I said. It’s not that I wasn’t bemused by an apparently talking cat, but I felt if this was the level of debate we were going to have, I might as well watch Scottish Questions. “Since when do you have a cat?”

“It’s not mine,” said The Admiral. “I believe he belongs to that chap around the corner.”

“What kind of person teaches their cat to speak?”

“I think you’ll find,” said The Admiral, “that the results of most experiments with verbal communication in cats have tended to be negative. This is not so much a talking cat as one with an unusual pronunciation of the word ‘meow.’”

“That’s not really a conversation though, is it? More like a Beatles song. Were I to ask him about Boyle’s Law, he’s unlikely to explain that, assuming temperature remains unchanged, the absolute pressure and volume of a confined gas are inversely proportional.”

“Isn’t that just because he didn’t study thermodynamics?” I said.

“Hmm,” said The Admiral. “Admittedly, he may have spent more time on Kinetic Theory. Why don’t you try talking to him?”

I crouched down to welcome the visitor. “Hello, Boyle,” I said, and immediately felt ridiculous.

“Would you like some milk?” I poured a little into the saucer.

“Noooo,” said the cat, rushing towards it and eagerly lapping it up.

“You see?” said The Admiral. “His response is not necessarily negative. In fact, we don’t even know if he is speaking English. Were he a native Pole, this would actually mean ‘yes’. Or were he Japanese it would mean ‘of.’

“I don’t think you’re quite grasping this,” said The Admiral, doing his best to hear an explanation of electrical conduits whilst continuing our discussion. “He’s just an eccentric verbaliser, a bit like yourself.”

“But he must have been trained to talk like that.”

“Actually,” said The Admiral, “I believe it may be the other way round. The chap around the corner is quite the curmudgeon and I suspect the cat has trained him to take a negative view of life. He may have become so accustomed to hearing the word ‘no’ that it now plays a huge part in his daily discourse. In which case, Boyle has a lot to answer for, don’t you, Boyle?”

It was a very intelligent cat who could not only speak several languages but had trained his master to behave in such a manner. I began to have some sympathy for the man who had simply been conditioned, and it made me wonder about those whose only notion of positivity is to continually repeat that we are positively screwed.

Share on TwitterShare on FacebookShare on Pinterest
In which Tony and The Admiral encounter a feline with an unusual pronunciation of the word ‘meow.’