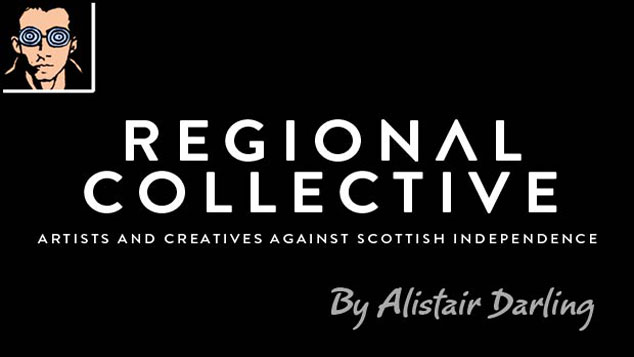 Now look. I only got into this because of that Joyce McMillan and her ‘all the artists are voting Yes’ nonsense. This may or may not be true, but if it is, it’s because Alex Salmond promised them a washing-free independent Scotland. If he’d said independence meant getting out of bed sober before noon and looking presentable, they’d very soon come around to Better Together.

Of course there are Scottish artists who support the UK. There must be. Just because I haven’t met any doesn’t mean they don’t exist. Admittedly we’re lacking any equivalent of that dreadful National Collective and their woeful bleatings about wishing trees and Icelandic goat herders. Even their cartoons are poor. I haven’t been in a single one of them. Better Together’s lack in this regard may not necessarily be a bad thing. Do you really want 500 Questions dressed up as an extended prose poem? Or a demolition of the SNP’s currency plans in rap?

But not to be outdone, I have taken the initiative and set up a new website, Regional Collective – Artists and Creatives Against Scottish Independence, as a platform for No-voting artistic types. You know who you are, even if I don’t. Let this be a starting point for a new flourishing of anti-independence bile in the creative arts.

Why me, I hear you ask. Well, somebody has to do it. I may not be much of an artist but I’m certainly creative. As Chancellor of the Exchequer, I was the one who bailed out the banks with your money, a hugely imaginative act which I’m sure would never have occurred to any of you; I’ve flipped for Britain, having designated four properties as my second home in four years; and I claimed parliamentary expenses for a flat that I let out whilst also claiming living allowances for Downing Street. I’d like to see Alan Bissett try that.

So, on to the website. My first challenge was to design a logo. Now, my understanding of typesetting is that you should use as many different colours and styles as possible but stick to well-known fonts such as Comic Sans and Brush Script for maximum effect. Hence, my first effort: The result of this was that I had to get Ian Taylor to pay National Collective for the logo at the top of the page. We may not have any design sense but we certainly have a truckload of cash, and in politics that’s what counts.

What about the actual content of the site? Well, let’s start with photography. And just to show we can do Icelandic goat-herders as well as any secessionists bent on breaking up Britain, here’s a man with a bucket: I’m not seeing any ice in this particular shot but I’m led to believe the most amazing results can be achieved with Photoshop. Whether that extends to painting in a grassroots artists’ collective that doesn’t exist remains to be seen.

Next – a poem in the Scots tongue:

But pith and power, till my last hour, I’ll mak this declaration; We’re bought and sold for English gold, Such a parcel of incredibly dedicated and hard-working public servants in a nation.

Perhaps the biggest challenge for the website would be in the field of illustration as, unlike photography and poetry, it requires some skill. I set out with pencil and paper, thinking a self-portrait might give the site a little character: And so it did. It gave it a little character with bushy eyebrows waving a flag. Once again, I had to get Ian Taylor to pay National Collective for the portrait below, even though I’m not convinced it’s a particularly true likeness. If this exercise proves nothing else, we’ve shown we can keep National Collective in work.

Now, calling all No-supporting artists. Are you there? Hello?

Share on TwitterShare on FacebookShare on Pinterest
Now look. I only got into this because of that Joyce McMillan and her ‘all the artists are voting Yes’ nonsense. This may or may not be true, but if it is, it’s because Alex Salmond promised them a washing-free independent Scotland. If he’d said independence meant getting out of bed sober before noon and looking presentable, they’d very soon come around to Better Together.