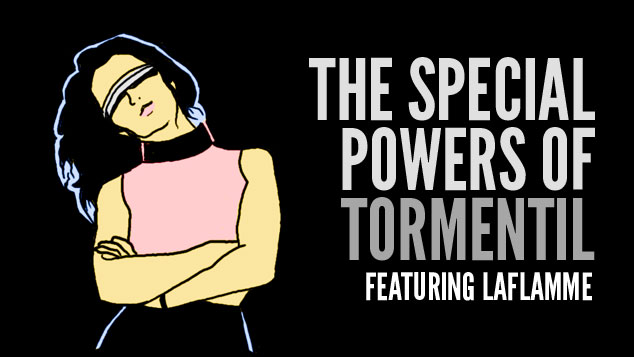 I met LaFlamme at the Botanical Gardens. “It’s a fecund paradise,” she said. Her language was quite shocking at times.

We were on a semi-furtive mission to procure a cutting from a particular herbaceous perennial, the name of which continues to escape me despite The Admiral’s repeated tellings. The Admiral had been researching an apparently highly effective hangover cure which depended on the leaves and stem of the plant. Early tests with a garden centre variety were hampered by our collective inability to keep anything in a pot alive apart from fungus, and it was decided that growing a little guy from scratch might bring out a parental instinct that would help discourage him from dying.

“What are you doing?” said LaFlamme.

“This is how I remember the name,” I replied. “I start with mental torment then combine the words in different ways until it comes back to me.”

“How do you remember mental torment?” said LaFlamme.

“Tormentil,” I said, nodding. “I would have gotten there eventually.”

“Maybe,” said LaFlamme, “but I wasn’t sure how much mental torment I could take.”

We found an uncharacteristically useful piece of graphic design in the form of a signpost. It read ‘Herbaceous Perennials.’ This led us to a winding path on a shallow incline towards an extensive rockery. When the incline turned steep, my own incline was to turn back but LaFlamme was two paces ahead of me and I was blinded by her milky-white calves.

As the incline levelled out, we rounded a corner and LaFlamme stopped abruptly, forcing the top of my head to collide with her back. It had long been my dream to collide with LaFlamme but this wasn’t quite what I had in mind. I peered round from behind her elegant frame to find a well-groomed, middle-aged gentleman with fine, thinning hair. He had secateurs in one hand, a cutting in the other, and wore an expression of utter guilt. He froze in a half-turned position, as if unsure whether to make the full 180 or return to base. Either he too was blinded by the fullbeam effect of LaFlamme’s legs or he was up to no good.

“Phlobaphenes,” he said. It was an unusual opening gambit and suggested the latter.

“Do you work here?” asked LaFlamme.

He hesitated before replying in a painfully hesitant whine: “Yes?”

“Why are you wearing a suit?” I asked.

“I try to be presentable at all times?” he said, again offering his reply in question form as if testing how much we were willing to believe. “It shows the plants due respect?”

When I stepped out from LaFlamme’s shadow, something I’m unable to do often, I recognised the man. It was gourmet, bon viveur and Martini devotee, Suave Gav, who I’d met at a winemakers convention. I was only there because I designed a flyer for one of the exhibitors and thought there’d be freebies. But Suave Gav was altogether more serious. He was taking notes.

“Armstrong,” he said, extending his secateurs. “Gavin. I believe we may have met previously. To be perfectly honest, we extract phlobaphenes and triterpene alcohol from the Potentilla Erecta. It produces a rousing Bavarian liqueur called Blutwurz.” It was certainly plausible that the plant he was interfering with could produce a rousing Bavarian liqueur. Less plausible was the idea that scholarly botanic types called it Potentilla Erecta. But they did. Go ahead, look it up.

“Potentilla Erecta?” said LaFlamme. “That does sound rousing. Does it have any special powers? You know, increased circulation, hot flushes, shortness of breath, panting, drooling?”

“Oh yes,” said Armstrong. “Its health benefits are well documented. A compound prepared from the roots and bark has been used to treat a number of ailments from headaches to pimples. It’s often used in herbal medicine as an astringent due to its tannin content.”

“Anything else?” asked LaFlamme.

“Yes,” he replied. “Prepared rather differently, it can give you a thumping great erection.” This was evidently the answer LaFlamme was looking for, and she giggled with delight.

I stepped towards the herbaceous bush and viewed its accompanying signage. ‘Potentilla Erecta,’ it read. ‘Common name: Tormentil.’ So this was the elusive shrub The Admiral asked us to track down for his dubious and very likely fruitless experiment. It was nothing to look at. Its straggly low-lying leaves seemed banal and its weak yellow flowers a bit uninspiring. I wondered if it might feel much the same about me. Skinny, it would say, not very tall individual with pale skin and a heavy frown that won’t be forgiving in middle-age. Probably ought to quit moping and take some exercise.

But whatever we made of each other’s appearance, it was a multitalented plant that could both cause a hangover and cure it, not to mention having the combined powers of Aspirin, Clearasol and Viagra. It was a wonder there wasn’t a queue of impotent spotty migraine sufferers all desperate for a hair of the dog.

Share on TwitterShare on FacebookShare on Pinterest
In which Tony and LaFlamme first encounter deviant gastrophile, Suave Gav.