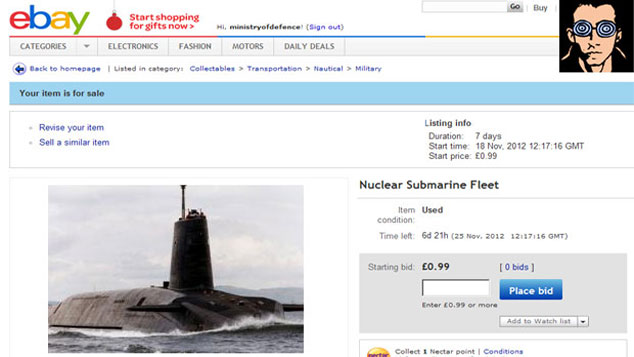 Following reports last weekend that the UK’s replacement nuclear submarine fleet had severe problems which effectively made it unfit for purpose, I thought somebody should do the only sensible thing and offer it for sale on Ebay. As the fleet was not really mine to sell, I did it on behalf of UK defence minister, Philip Hammond, who should really have thanked me for showing such initiative.

Nuclear submarine fleet. One previous owner. Reason for sale: riddled with construction and design flaws. Some corrosion. Painfully slow. A few holes. Faulty periscopes so you won’t be able to see the surface without making an appointment. Nuclear monitoring instruments are the wrong type so possible exposure to radiation. Has been known to cause psychological problems in crew members. HMS Astute has a couple of dents because we grounded it off the Isle Of Skye. Hey ho.

Bought it from a guy called Boaks for £9.75bn a few years back but it’s just not quite what I had in mind. Will settle for a couple of grand o.n.o.

Eagle-eyed viewer Doug Daniel, currently in the market for a fleet, immediately spotted the item location was listed as ‘London.’ This was due to Ebay’s assumption that the item resided with its vendor, ‘ministryofdefence’, at Main Building, Whitehall, London SW1A 2HB. Had they asked for the location of the actual item, I’d have said ‘currently festering somewhere around HM Naval Base Clyde, Faslane, Helensburgh G84 8HL.’ Clearly it’s absurd to think that a nuclear submarine fleet could be stored in Whitehall. That’s what Scotland’s for.

Bidding, beginning at 99p, was robust, but sadly the seven-day auction was cut short by around five days and twelve hours when another eagle-eyed viewer, this time Ebay, decided my fleet wasn’t really ‘Collectable’ at all and pulled the plug. But not before the page racked up several thousand views and I had the chance to answer a raft of questions from eager bidders desperate for a hunk of useless metal. For a change, I did not make these up.

Q: How do we know you’re actually the Ministry Of Defence?

A: I have a badge and I’m not very bright.

Q: Can I see your badge?

Q: I presume these items are boats of some description. Will they fit in my swimming pool? I have a very large swimming pool and would like to expand it.

A: As you know, submarines are designed to operate under water. However, these will be under water before you even switch them on, as they leak. If you’re going to expand your swimming pool, expand downwards.

Q: Can I do a test launch before I bid? Thx

A: If you have a month to spare. Last time we tried it, after a week I could still see all the crusties at the protest camp. Then we ran aground. Good times.

Q: You send to Nigeria? I am very honest man, honestly. My uncle has just died, he was Prince Nadjer al Grabbem. He left me lot’s of money, all I need are your bank account details and your 4 digit pin and I will transfer to you all the money.

A: I read about your uncle. He should have known that hair-tongs were never intended for such a purpose, god rest his soul. Bank account details on their way.

Q: Will you dispatch immediately or will you wait till 2014 when you will be forced to get shot of them?

A: As I said, they’re not much use to us here, so reckon you could have them for Christmas. Happy Holidays!

Q: I feel that by purchasing this item & at the same time demanding foreigners in the middle east & Asia be forced to stop their nuclear programs I may feel a little bit hypocritical after purchase. Can I return this item if suddenly develop some morals towards humanity?

A: What am I, your mother? Do you want to nuke or not?

Q: As you have zero possitive feedback – does this suggest that you are not to be trusted? Do you have a holding company? Who is the boss? I would be reluctant to part with 99p with any confidence.

A: Is your mistrust based on the grounding of HMS Astute? If so, it really wasn’t such a big deal. We covered up far worse.

Q: We might be interested up here in Shetland. Once Scotland gets Independence, we’ll need nuclear capability to keep them away from our oil and money. Can you chip the missiles to lock onto Holyrood? Could be interested in a few Eurofighters, too.

A: I like the way you think. Shetland, this could be the start of a beautiful friendship.

Share on TwitterShare on FacebookShare on Pinterest
Following reports that the UK’s replacement nuclear submarine fleet was unfit for purpose, I thought somebody should do the sensible thing and offer it for sale on Ebay. (First published at National Collective.)