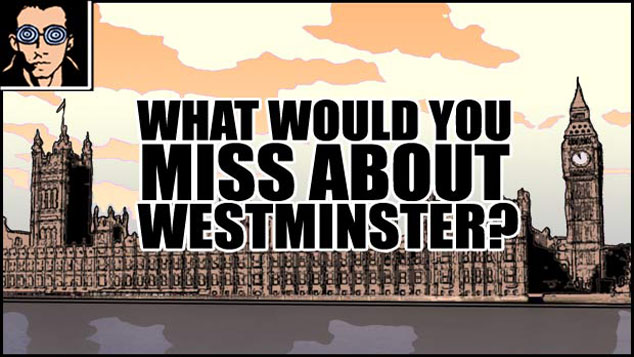 According to The Herald, Better Together plan to ‘step up debate in 2013’ by asking Scots what they would miss about Britain should Scotland vote for independence. Aside from the matter of Anas Sarwar showing us what their idea of stepping up debate looks like, who said anything about leaving Britain? Britain is an island, and even the most optimistic Yes voter knows removing Scotland could be tricky. You might as well ask what we’d miss about the sky.

Why not ask ‘what would you miss about the United Kingdom?’ or more specifically ‘what would you miss about Westminster?’ I’ll tell you why not. Because nobody cares about them. They don’t resonate in the public subconscious the way the word ‘Britain’ does. Britain’s the land of The Beatles, Matt Lucas and Team GB, and in the run-up to the referendum you’re not likely to be given a chance to forget it. Expect to see the line between Britain and the United Kingdom deliberately blurred, because opponents of Scottish independence are counting on you not to know the difference.

What they want you to think:

Westminster: Seat of government and the only possible place for proper decision-making.

Westminster: Home of Scottish Questions, a half-hour pseudo-debate where our sole Conservative MP, David Mundell, speaks on behalf of Scotland to a restless house eager to get on to more important matters.

The political entity is called the United Kingdom and it has a famous flag. The flag gets mistaken for the flag of Britain, but it’s the flag of the union. It has a lot to answer for, but it’s also become a weird kind of fashion symbol across the globe. It’s unusual amongst fashion symbols in that it’s indescribably ugly, but nonetheless it’s everywhere. Even Cubans have it on their handbags. Probably serves us right for all those Che Guevara t-shirts.

Ah, Westminster. How I’ll miss you. Your pomp. Your splendour. Your pointless, unelected lords. You’re a monument to a bygone age. An age of empire, class divisions and privilege. But no matter that the Office for National Statistics has declared us the most unequal nation in Europe; according to Better Together, this is “as good as it gets.”

On Twitter, I asked the people who really matter – my fellow plebs, the Scottish voters – ‘what would you miss about Westminster?’ Most popular response was ‘nothing’, but that wasn’t going to help me write this article. So I kept prodding as I need all the help I can get. Here are the runners-up, which I may or may not have tweaked.

Governments we didn’t vote for.

Posturing on the world stage pretending we have an empire.

Trident missiles that will never be used, except accidentally.

Eagerness for US-style healthcare that even the US doesn’t want.

Dismantling of the welfare state.

Privatising everything that isn’t physically nailed down, despite the disastrous effects on the rail network and the utilities.

Having to pay for lords’ duckhouses and moats.

MPs too busy scaremongering on independence to vote against welfare cuts.

Ah, Westminster. You refuse talks on independence then complain that Holyrood doesn’t have all the answers. You warn we’ll be a pound worse off under independence, unaware that most of us would happily pay more just to be rid of Gove. Your Scottish MPs claim they’ll be “looking out for Scotland”, but only once you eject them. You call Holyrood “a dictatorship” and illustrate exactly why we stopped voting for your parties. You say a Yes vote would put 19 hundred thousand billion jobs at risk. You say nobody will like us and we’ll be left sitting in a corner crying.

Yes, Westminster, I’ll miss your carping. But most of all I suppose I’ll miss your vision of a 21st century United Kingdom: joyless, unfair, unimaginative & frightened.

There is light at the end of the tunnel, Yes people. And with the Section 30 bill passed, Westminster’s role in the referendum process is over. Altogether now: ‘Missing you already!’

Share on TwitterShare on FacebookShare on Pinterest
According to The Herald, Better Together plan to ‘step up debate in 2013’ by asking Scots what they would miss about Britain should Scotland vote for independence. Aside from the matter of Anas Sarwar showing us what their idea of stepping up debate looks like, who said anything about leaving Britain?